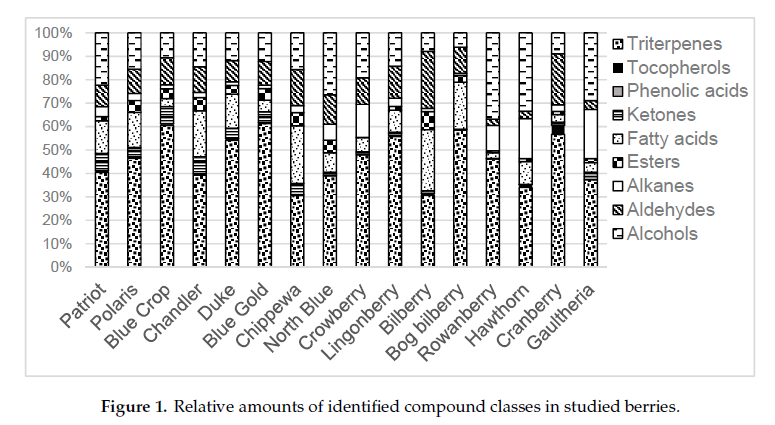 Abstract: The outer-most layer of plant surface, the cuticle, consists of epi- and intra-cuticular wax. It protects the plant from dehydration, extreme temperatures and UV radiation, as well as attacks from pests such as molds and bacteria. Berry cuticular waxes are studied to understand the metabolism character (factors aecting wax layer composition in dierent berry species) and increase the microbial resistance and shelf life of berries. The aim of this study was analysis of the surface wax composition
of nine species of wild and cultivated berries from Northern Europe.

Cuticular wax analysis were done using gas chromatography-mass spectrometry. A total of 59 dierent compounds were identified belonging to nine groups of compounds, namely, alkanes, phytosterols, alcohols, fatty acids, phenolic acids, ketones, aldehydes, esters and tocopherols. The analyzed blueberries had the highest amount of wax present on their surface (0.9 mg berry􀀀1), triterpenoids were the main wax constituent in these berries, with up to 62% wax composition. Berry species and varieties were compared based on their surface wax composition—similarities were found between dierent blueberry varieties; however, other berries showed dierences based on concentration and composition of cuticular wax.